In October 1939 the Patriotic Purposes Emergency Regulations were gazetted.  In order to avoid the situation which had arisen during World War One, when there were nearly 600 separate war funds and just under 1000 collecting agencies, the intention was to establish a national patriotic fund and 11 provincial funds.It was hoped that this would result in much more controlled and effective use of the money raised.  The provincial fund districts already existed – they were those which had been constituted under the New Zealand Centennial Act.[1]  One of the centennial celebration events planned for Gisborne had been the re-enactment of Captain Cook’s landing.  Initially it was intended to go ahead with this event in 1940[2], but that idea was later abandoned.[3] One project which did go ahead as planned was the Centennial Marine Drive, which was under construction at the end of 1939.[4]

In Tairāwhiti patriotic fundraising was overseen by the Gisborne-East Coast Provincial Patriotic Council.  One of the first major contributions to the patriotic funds came from the Poverty Bay Women’s Central Representation Committee, who had undertaken to co-ordinate the catering at the A&P show at the beginning of November.  As a result, a cheque for £505 was forwarded to the District Patriotic Council.  It was suggested that some of the proceeds should be made available to assist with the cost of billeting country members of the first draft for the New Zealand Maori Battalion, which will leave Gisborne early in January, 1940. It was pointed out that these men from the country and Coast will be obliged to spend a night in Gisborne prior to their departure for camp.[5] 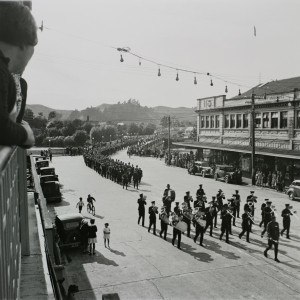 The Women’s Representative Committee had been formed in April 1939,  for the purpose of co-operating with the authorities in the event of any emergency arising.  It was estimated that the organisations represented at the initial meeting had a combined membership of 2900.[6]

In September 1940, acting together with the Provincial Patriotic Council, they established a shop in conjunction with a wool depot in premises made available to them in Gladstone Road.[7]  The shop closed at the end of 1945, by which time £21,943 had been raised.  Once petrol rationing was introduced it put a check upon the capacity of country people to keep the shop stocked throughout the week. From that time on the shop was opened on Fridays and Saturdays…….The onset of rationing in important foodstuffs, and the consequential cutting off of supplies of meat and butter, in particular, effected a sharp reduction in the returns for subsequent years, but the annual sums raised were still fairly satisfactory…..It was reported that a large total of knitted goods had been arranged through the patriotic shop, whence wool was drawn by many women who took part in the knitting effort. They contributed 5203 balaclavas. 5036 scarves. 3895 pairs of mittens, 944 pairs of socks, 300 pullovers and 4532 hussifs. These figures do not include air force garments or goods dispatched in soldiers’ parcels[8].

Much fundraising was undertaken by groups or organisations already in existence, such as the Gisborne Business and Professional Women’s Club who inaugurated their own fund for patriotic purposes.[9]Other groups were formed especially for that purpose, such as The Tokomaru Bay Maori Patriotic Association,[10] the Tolaga Bay Ladies Patriotic Committee,[11] or The Hoko-whitu-a-Tu Maori Ladies’ Central Committee, who amongst other activities, ran a series of bring and buy days in a shop on the corner of Stout and Fitzherbert streets.[12] Ladies Patriotic Committees were also formed at Tokomaru Bay, Muriwai and Ormond. Not all monies came from organised groups – some, such as the local Greek community, simply chose to donate the whole of the proceeds of one day’s trading (£112) to the council.[13]

Private individuals also participated in different ways, one was by holding gatherings in their own homes such as an invitation party where the various forms of entertainment offered to the guests were enthusiastically patronised, and the sale of various articles, including a memento received from a New Zealand airman in the United Kingdom, further increased the revenue.[14]

Some existing clubs and organisations incorporated patriotic fundraising into their normal activities by donating takings from entrance fees, an approach frequently taken by sports clubs who also incorporated patriotic matches or tournaments into their programmes.  Other groups held special events, such as the the five-hundred tournaments organised by the Kopuawhara Play Reading Circle,[15]or the dance organised by the Rere Dog Trial Club.[16] Balls, dances and concerts were popular ways to support the patriotic efforts.  To this end, the  services of the Gisborne branch of the New Zealand Musicians’ Union were placed at the disposal of the council to assist in the raising of patriotic funds. One suggestion made was that if a patriotic ball or similar function was organised the union would be prepared to provide free a combined orchestra of up to 10 instruments or more.[17]

In June 1940 a street carnival was held in the town clock block, to supplement the sick and wounded soldiers’ fund.  Events began at 7 o’clock, with a parade of concert parties led by the Gisborne Military Band…. Bright entertainment has been arranged, and considerable interest should centre in the various auctions and raffles. Children will be catered for with pony rides and goat arid cart rides.[18]  Not everyone was in favour of raffles as a means of fundraising : the Gisborne Ministers’ Association had already lodged a protest, stating their belief that increased facilities for gambling at the present time constitute a national menace, and must inevitably result in a weakening of the moral fibre of the people.[19] Nevertheless, it continued to be a popular method of fund raising, with some substantial prizes available – in September the Poverty Bay Electric Power Board donated an electric refrigerator as second prize in a fund raising art union.[20]First prize was a car.  This was part of the Queen Carnival campaign, which took place over six weeks in order to raise funds for rehabilitation purposes.[21]The Queen Carnivals were major undertakings; another was held in 1943, followed by a Victory Queen Carnival in 1945.

Local fundraising efforts were given a boost by touring military bands. In October 1941 the Royal New Zealand Air Force Band came to Gisborne for a series of events which included recruiting parades, ceremonial marching, visits to the hospital and school, and two concerts at the Opera House.  In addition, the Air Force Dance Orchestra played at a function at the Poho-o-rawiri hall.  Later in the week there were programmes of Air Force films.[22]

It may be that towards the end of 1941 a little donation fatigue set in, as there was a disappointing response to a flag day appeal.  To the approaches of flag-sellers, many people replied with the blunt question: “What is the money for?”…..It was evident that a proportion of those approached were not only not interested in making the appeal a success, but were critical in their attitude towards the whole matter of patriotic effort.[23]

In 1942 the A&P was cancelled, in view of war conditions,[24]and a carnival was held instead. The ice cream stalls proved popular – it was estimated that each seller scooped four icecreams a minute, money raised going to the patriotic fund.

An exhibition of the work of the war artist Lieutenant Allan Barns-Graham (who was born in Gisborne) was planned for November 1944.  The paintings are all the property of the New Zealand Government, in accordance with the terms of Lieutenant Barns-Graham’s appointment as an official war artist, and no opportunity will be presented 1o the public to purchase examples of the Gisborne artist’s work in the war theatre. The patriotic funds will benefit, however, from the sale of catalogues to patrons of the exhibition.[25]

Another fund raising event that month was organised by the Thirty-Thousand Club who provided another attractive display, this time in the form of an inter-house sports marching contest at the Reserve.  About 100 Gisborne girls have been diligently training for this event and 10 teams will take part.[26]

Although some patriotic fund raising continued after the war ended, there was no longer mention of fund raising activities in 1946.  Discussions now were about how the funds were to be used. 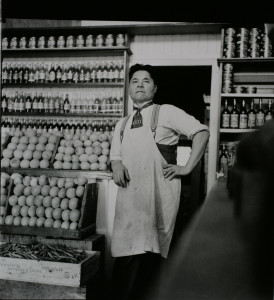 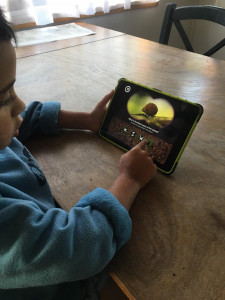