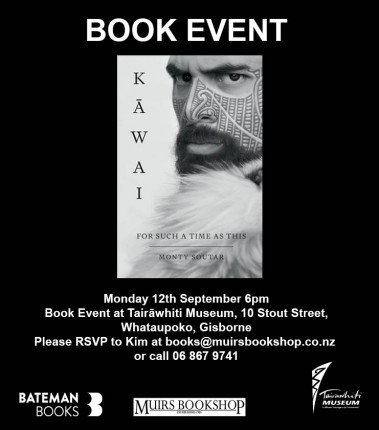 Hear from the author Monty Soutar at the Gisborne launch of Kāwai.

This epic historical adventure tells the story of pre-colonial Aotearoa New Zealand like it’s never been told before. A young Maori man, compelled to learn the stories of his ancestors, returns to his family marae on the east coast of the North Island to speak to his elderly grand-uncle, the keeper of the stories. What follows is the enthralling account of the young man’s tipuna, the legendary warrior Kaitanga, after whom his marae’s whare puni has been named.

Tracing the author’s own ancestral line, Kawai: For Such a Time as This reveals a picture of an indigenous Aotearoa in the mid-18th century, through to the first encounters between Maori and Europeans. It describes a culture that is highly sophisticated with an immense knowledge of science, medicine and religion; proud tribes who live harmoniously within the natural world; a highly capable and adaptable people to whom family and legacy are paramount. However, it is also a culture illuminated by a brutal undercurrent of inter-generational vengeance, witchcraft and cannibalism.

Kawai: For Such a Time as This is the remarkable first novel by respected historian Dr. Monty Soutar, ONZM (Ngati Porou, Ngati Awa, Ngai Tai ki Tamaki, Ngati Kahungunu) in a series that reveals the role of colonisation in shaping Aotearoa New Zealand, balanced with an honest appraisal of the country in pre-colonial times.