The diverse range of material contained within this collection tells us the stories of the rich heritage of Tairāwhiti and includes textiles, garments, tools, furniture, equipment, toys and games and much more.

The museum also holds a large collection of surfboards, many of which are on display in the exhibition Te Moana, and a collection of material from the Star of Canada. 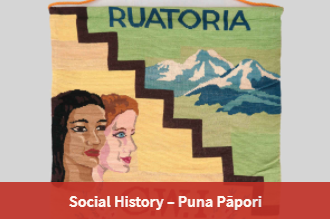 Explore the collection on our online database. We are continually updating and improving the online collection and regularly add new objects.

Donating to the collection

See our Recent Acquisitions page for information about new additions to the collection.

Researchers can view collections that are not on display by making an appointment with the Museum Collection Manager.  Staff can also take small group tours through the collection storage facilities by appointment.  Please note that staff are not always available immediately and it is advisable to make arrangements as far in advance as possible, particularly if you are only visiting Gisborne for a short period.

Researchers who are unable to visit in person can make their enquiry by email, letter or telephone

The museum  displays works from the social history collection in semi-permanent and short term exhibitions.

The museum is offered many interesting items for the collection over the course of the year.  Often they are seemingly ordinary, everyday objects, but what makes each of them special and worthy of collecting is the wonderful stories they can tell us about our region’s history. This wicker basket is certainly one such object. This basket was used by William Hamilton (known as Ham) Hannah (b. 1920, d.1967) to deliver bread for Walter Findlay’s Bakery in the 1930s. Ham would have delivered bread around Gisborne by horse and cart.  A few people out there may remember having bread delivered by him, perhaps using this basket! Ham served as a Driver in the Army Service Corps in the Second World War and continued to work as a driver when he returned to Gisborne after the war. In the 1960s, he was the Custodian at Churchill Park. He was married to Sarah (Sadie) and they had four children. We would like to thank Julie Hannah for gifting her father-in-law’s breadbasket to the museum.

Ham and two of his four children, Kevin (left) and Gareth (right), posing in the basket in the garden of the family’s home.

Family photographs are one of our greatest personal treasures. The family photo album is the one item people consider they would ‘grab’ in a fire. We see them as a collection of life’s memories rather than an assemblage of images. The museum regularly receives donations of family photographic collections. Some are beautifully set out and... Read more »

We welcome ideas for new projects and exhibitions so if you have something in mind, please get in touch – we would love to hear from you!