In December 2019 the museum received a photograph of members of No 2 Platoon of the SEF (Samoan Expeditionary Force), dated December 1914, from the Gisborne Returned Services Association.

After publishing the photograph in The Gisborne Herald, we received help from one of our Friends of Tairāwhiti Museum, John Johnston, who has assisted us by compiling a much more detailed list of the men photographed based on the information in the book “The Samoa (N.Z.) Expeditionary Force 1914-1915” by Stephen John Smith, pub. 1924. Thanks to John we have now been able to identify (or narrow down to a few possibilities) each of the men pictured, although we are yet to establish a Tairāwhiti connection.

Wayne Marriott, great-grandson of Peter Stanley Marriott (pictured in the third row) also got in touch.  He told us that although the photograph was dated 18 December 1914 it must have been taken earlier as Peter was back in Wellington on 7 December 1914 having contracted a disease while stationed in Samoa.

If you have any more information to share please get in touch. 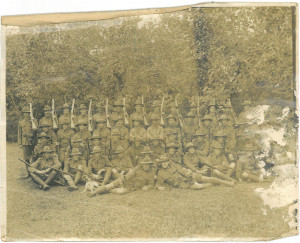 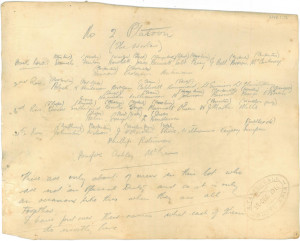 No 2 Platoon Samoan Expeditionary Force, 1914 (back of photograph)

Transcription of back of photograph:

“There are only about 7? Men in this lot who are not on Special Duty and so it is only on occasions like this when they are all together.”

“I have put over their names what each of them do mostly here.” 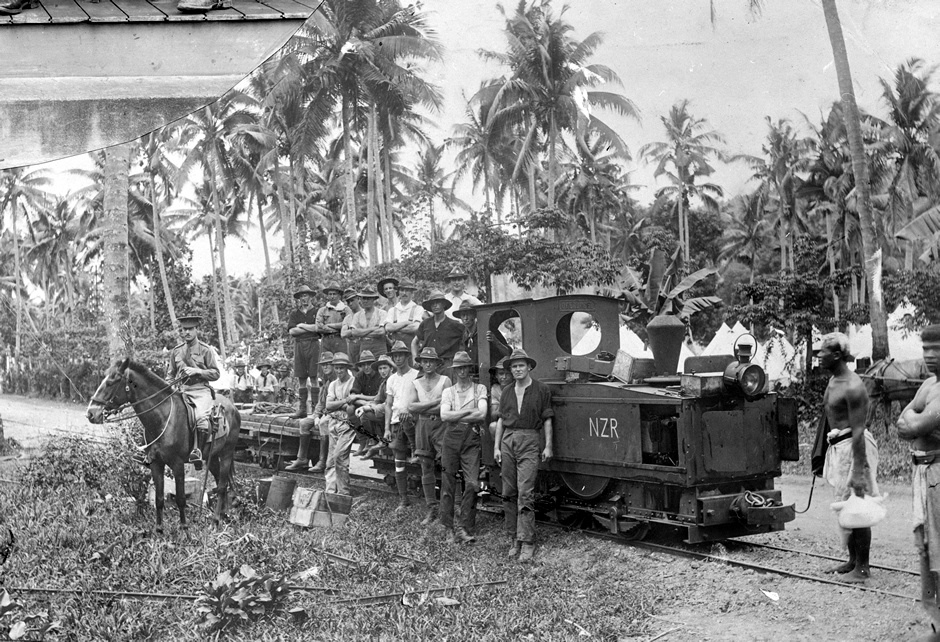 Members of the New Zealand Railway Engineers unit in Samoa pose alongside their commandeered German narrow-gauge locomotive, now bearing the letters ‘NZR’ (New Zealand Railways).\ One of the men leaning against the engine has been identified as Sapper Peter Stanley Marriott, an NZR locomotive fireman who was later wounded while serving with a trench mortar battery on the Western Front. https://nzhistory.govt.nz/media/photo/nz-railways-engineers-samoa-1914

In August 1914 a composite force was mobilised in New Zealand with the aim of seizing the German wireless station in German Samoa. The German population of the island was believed to number 300 to 400 men of military age.

The force included a total of 1363 officers, nurses and men, including one company of New Zealand Railway Engineers, totalling 258 men. The men for this company were drawn from all parts of New Zealand and within 24 hours of the call being made for volunteers from the NZ Railways Department and NZ Railways Battalions they paraded in Wellington, uniformed, armed and equipped. A detachment of Railway Engineers joined the train at Whanganui. An immense crowd at the Napier railway station farewelled a handful of local men, and at Masterton the whole town turned out with its band to give a fitting send-off to its fourteen volunteers.

The SEF landed at Apia on 29 August. There was no resistance from German officials and the following morning the Occupation was complete. Historian J.W. Davidson described New Zealand rule over Samoa as a ‘ramshackle administration’.

One of the Railway Engineers described their work in a letter published in the Evening Post, 11 November 1914:

Fortunately, on arrival it was found that the Germans had already constructed a light railway to the wireless station, but the line being in disrepair, a gang of surfacemen under Lieutenant Christophers, late of Engineers’ staff at Ohakune, was soon at work in the blazing sun, lifting, ballasting, and relaying rails. The total length of railway now in service is about eight miles, including the various lines to plantations. A petrol locomotive engine, manufactured by the Telefunken Wireless Co., was soon overhauled, and is now capable of hauling a maximum load of five tons at a maximum speed of twelve miles per hour. The engine is now employed conveying stores, etc., from the water front to Vaea Camp, where the Railway Corps is encamped. A frequent service was instituted, and for several days the ‘train’ averaged 30 trips per diem between Apia and Vaea. The engine is now branded N.Z.R. and has been christened A1, but the men miss exceedingly the customary whistle of an ‘A’ class engine. Enginemen Sutherland [W.A. Sutherland] and Smyrke [E.W. Smyrk] are requested to arrange to have a whistle affixed to the engine. (both pictured in this photograph)

On their return from Samoa many of these men went on to serve in other theatres of the war.

In late 1918 Western Samoa was devastated by an influenza pandemic . Sick passengers on  the New Zealand ship Talune arrived at Apia from Auckland on 7 November 1918 and were allowed to disembark without quarantine, a failure of the New Zealand Administration.  Influenza spread rapidly through the islands and killed up to 8500 people – a staggering one-fifth of the population.

You can find out more about the Occupation of German Samoa and the Influenza Pandemic in this video story from the Great War Stories series. The episode ends with Tupe Lualua’s 1918, a choreographed performance of the devastation caused by the influenza epidemic.

Did not find this man’s Army records.

You can't always trust what you read - John Hawkesworth's 'An Account of the Voyages ... [of] Captain Cook 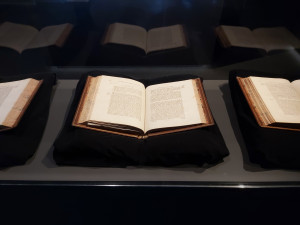